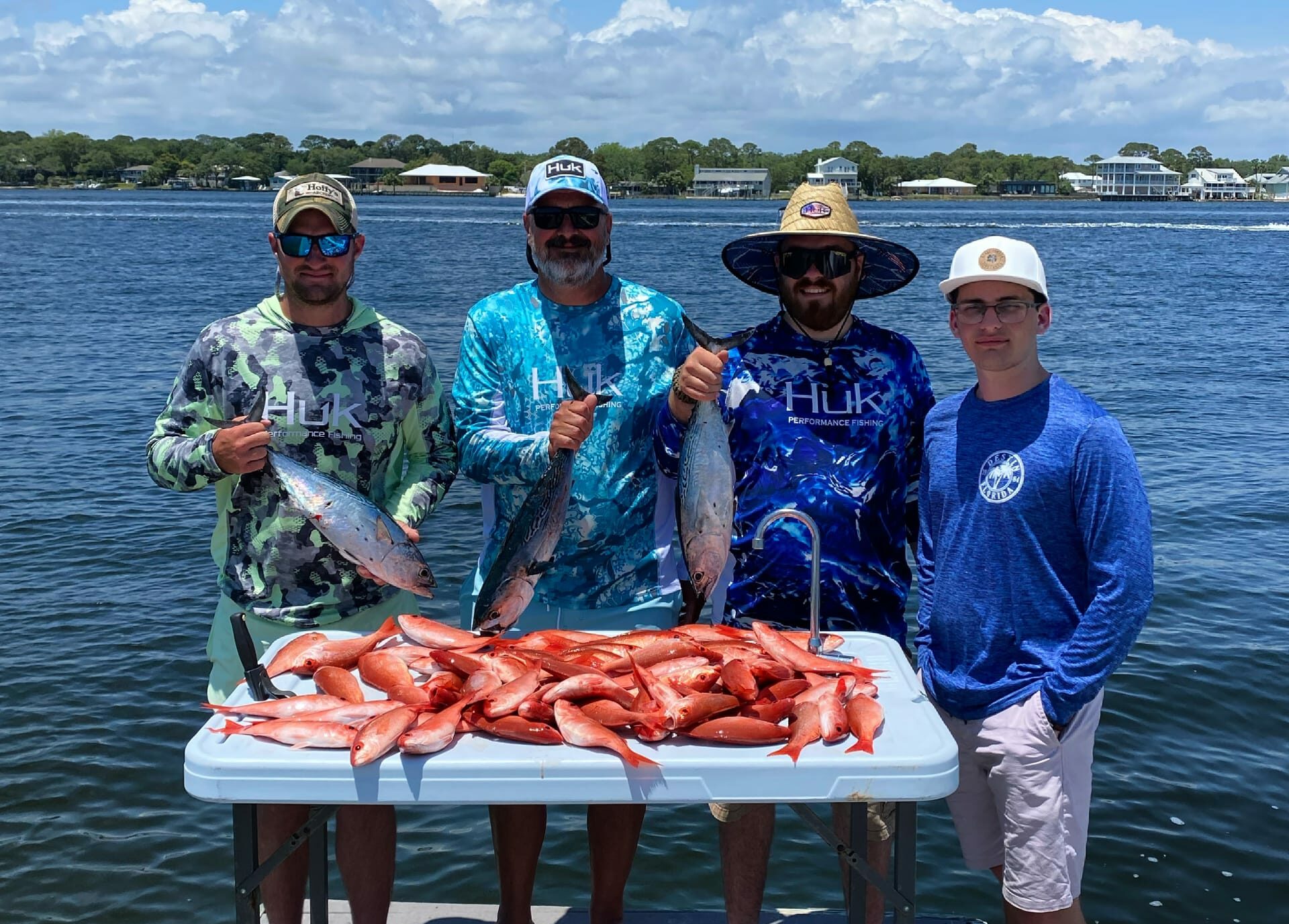 Want the Chance to Reel in an Impressive Catch?

In the Florida panhandle we’re spoiled with some of the best freshwater and saltwater fishing Florida has to offer. If you’re new to fishing, it can be tough to decide which fishing style you’d prefer to dabble in first. Either choice can bring you a great day out on the water, but can affect just how successful you want to be. We’re sharing the main differences between the two so you can decide which may make for the best day on the water while visiting Northwest Florida.

What’s the Main Difference Between Saltwater and Freshwater Fishing?

Adventure seeking anglers are drawn to this type of fishing because this is where some of the greatest fighting fish are. It is said that saltwater fishing is one of the best ways to get the best fishing experience you can have as an angler.

The wide variety of large fish you can catch is a good selling point for this style. The rush you get after you bag your catch is amplified by the amount of effort you gave.

Fishermen like to say that it is the “fight” that gets them to come back out into the water every single time. To be frank, I believe that it is the adrenaline rush you get during the fight. It pumps you up and enhances that triumphant feeling coursing inside your system to the next level; that is what keeps anglers coming back for more.

On the other hand, freshwater fishing refers to a fishing practice done in a freshwater location or any body of water that has less than a 0.05% salinity level such as lakes, rivers, and ponds.

This type of fishing can be more laid back than saltwater fishing. Many fishermen would say that they use this time to reflect and it is not hard to see why.

Typically, a freshwater fisherman would either be on a boat, on a dock or wading in the water when fishing. The steady sound of a stream and quiet surroundings is a good place to relax.

There is a great difference between the two and the type of experience you’ll have. Saltwater fishing can be exciting and quite the adrenaline rush since the fish fight to be caught. Whereas, freshwater is usually more laid back and relaxing for fishermen.

As a general rule, saltwater gear is more of a monetary investment than freshwater gear. Although the materials used for the rods are the same, the reel and other components of the rod are constructed differently.

The Three Most Popular Saltwater Methods of Fishing Are Trolling, Drifting and Bottom Jigging.

Trolling is used so that an angler can cover a large area in a short amount of time. It uses artificial lures, either stringers or solo, to entice the fish. For the drifting technique, live baits are used oftentimes with a burley or chum slick. A delivery method like large floats or kites is also utilized to keep the live bait near the surface and inside a chum slick. In saltwater, herring, mullet, cigar minnows, squid, and mackerel chunks are very popular.

With bottom jigging, many species are attracted to jigging lures because of the jerky vertical motion it makes and fishermen love it for its versatility. Saltwater anglers use this technique near a reef’s edge or when the bottom structure of the area is accessible with live bait rigs.

The three most popular freshwater methods of fishing are cast and retrieve, bottom jigging, and trolling. With casting and retrieving the continuous motion allows you to keep your lure moving in the water therefore, mimicking the movements of live bait. This technique can take a while to master but once you do, you’ll be getting bites in no time. With bottom jigging, jigs can be used both in saltwater fishing and freshwater fishing. The same steps are followed and the only difference lies in the bait used for this technique.

With freshwater jigging, focus on rods with plenty of backbone and slower action. This is because you want a rod that bends and straightens slowly. This will allow you to force the bait through the water column from the deep and also provide greater fighting power to yank big fish out of the depths and away from dangerous cover fast that could break you off.

Lastly, trolling and drifting. Yes trolling can also be used in freshwater fishing. This is especially useful when fishing in larger and deeper bodies of freshwater. You’ll be able to catch predator fish that lurk in deeper waters with this technique. No stretch is the way to go to reduce stress on the line, help with fish-fighting power, and hauling baits through the water at constant speeds. Furthermore, it will better alert you to more subtle bites. Drift fishing is another very popular freshwater technique often using live or dead bait. The most used bait options for drift fishing in freshwater are worms, minnows, shiners, suckers, and frogs.

There are several differences between salt water and freshwater fishing as well as many similarities. When you are ready to go on an exciting saltwater fishing adventure with Southern Country Charters call 850-739-3175 or click the booking link above to book an inshore or offshore trip and come explore our fishery, have fun, and catch fish!